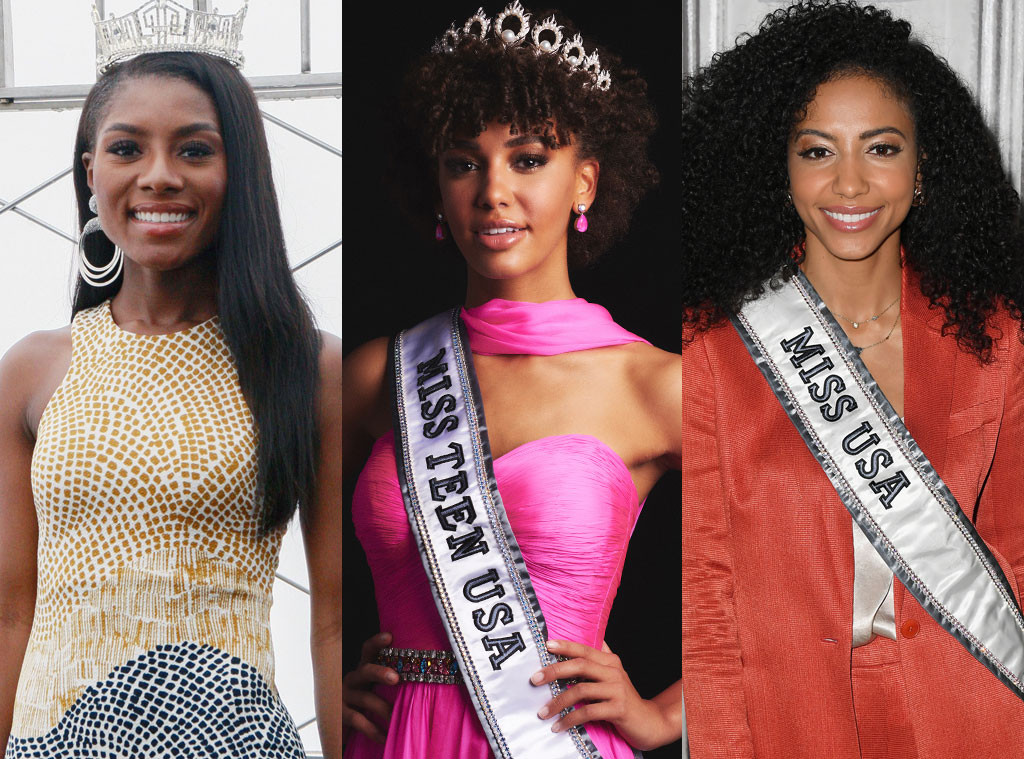 Cheslie Kryst, Nia Franklin and Kaliegh Garris are trailblazers in every sense of the word.

For the first time in history, three black women are the titleholders of the three major pageants titles: Miss America, Miss USA and Miss Teen USA. Let that sink in.

Cheslie, Nia and Kaliegh's recent achievement is even wilder considering it's been 36 years since Vanessa Williams became the first-ever black contestant to win the Miss America pageant in 1983. And, while the pageant world has made leaps and bounds in terms of progress, it's about time that there is equal representation for all!

And these three young women could not be more proud to be a role model for young boys and girls across the country. To find out how much this means to the stars, check out the interview below!

E!: You are a part of history with all three major title holders being African American! How does that feel?

Nia Franklin: It feels really great. It's still crazy when people are like, "You're a part of history," because it sounds so major. It's just something that I didn't expect. I mean, I obviously was Miss America. That's a part of history. In 2021, it will be the 100th anniversary of the organization, so that's in and of its self. I'm the 92nd Miss America due to like wars and things like that—throughout the years sometimes Miss Americas will be Miss America longer than just a year because they wouldn't hold the competition—so I'm the 92nd Miss America, but this past year that I won was the 98th anniversary, so that was certainly historical. But then six or seven months after that, Cheslie and Kaliegh win and then it's like, 'Oh my gosh, this is the first time in history that there have been three women of color holding these titles at the same time', which I was not even aware that that hadn't happened before. It just wasn't something that I hadn't thought of before.

Cheslie Kryst: I think more and more yes. At first, I didn't realize the impact that I would have, and then I realized a bunch of people were posting me on Instagram with Kaliegh Garris and a good friend of mine Mia Franklin. And that's when it dawned on me that we were three women of color in these huge incredibly visible positions in our nation. That was an incredible moment. I think it dawns on me more and more the more that we talk about it, yes.

E!: What has this year meant for you? What is your favorite thing that you've done or are able to do because of your title?

KG: For me, after I got titled and even before, I have always made it my goal to make everyone feel as welcomed and accepted as possible. The thing with that is you can do that on an every day level with just the individual people you meet. Now I have this platform to reach so many more people and make that impact much greater and I really take that into account with everything that I do. People are going to see what I post and what I say—no matter what that is—I want it to have a positive impact on people. My favorite thing so far is when mothers or young children message me and say, ‘Hey, I've never seen anyone that looks like you that is biracial and is accomplishing those amazing things without straightening their hair or feeling comfortable being who they are.' That really has an impact on me because growing up, I didn't necessarily have that role model that I connected to because, although in society we like to say that our skin tone doesn't matter. But when you see someone that looks like you that has the same skin tone or maybe the same hair texture as you, it really does have an impact on you because you are able to see that someone is accomplishing these great things that looks like you, so you know that you can accomplish it as well.

NF: It's been a year of growth and change, which are two things that can really spark just greatness and success. So Miss America, this was the first year that there was no swimsuit competition held, so that was kind of another part of history that was happening back in September, so being the first Miss America 2.0 has made me feel like I have a lot of responsibility, and I'm really excited about that.

CK: Oh gosh, there's been a lot of things. Can I give you a top three? Just recently last week I went back to North Carolina because the Council of Chief Justices was hosting their annual meeting in Asheville, NC and I was invited by the chief justice of the NC Supreme Court to come to that conference and speak. So the closing event of the conference was a fireside chat literally just between the chief justices and me! I was flattered and thrilled and pleasantly surprised that everybody was just genuinely interested in what I had to say. Especially since the legal industry is notoriously conservative so I wasn't sure how I would be received, so it was incredible, an incredible event. I'd pick that one. My second in the top three, I love Dress for Success, it's an incredible organization that focuses on economic independence for women by providing them professional clothing and a bunch of other programs. I was recently named a National Impact Ambassador for the organization, and that was awesome. So that moment, just hearing that and being able to continue my work for the organization was an incredible moment for me. And third, kind of fun, we worked with Best Buddies, it's one of the nonprofits that the Miss Universe organization partners with, and I got to go to a fundraiser recently in Boston and one of the events we did was a flag football game with Tom Brady and a bunch of his Patriot friends. That was so much fun because at one point I was playing on his team and I like blocked somebody and he came running down the field like, "Great defense," and I was like, 'Wow, you have six Super Bowl championship rings and I did some good defense in this little flag football team.'
CLICK HERE FOR FULL ARTICLE

For the first time in the pageant’s history, an out lesbian woman will take the stage.
BTS

Catriona Gray to be among Miss South Africa 2019 judges