Miss America, Miss USA, and Miss Teen USA Are All Black Women—And They Want That to Be Normal

On May 2, 28-year-old Cheslie Kryst was named Miss USA, just four days after 18-year-old Kaliegh Garris took home the Miss Teen USA crown, and eight months after Nia Franklin, 25, earned the title of Miss America. Kryst’s win meant that for the first time in history, the current Miss America, Miss USA, and Miss Teen USA are all Black women. During a time when racial strife is dominating not just our communities, but our headlines—and our nation’s leader isn’t shy about hurling out racist sentiments—according to the pageant world, at least, the women who best represent the United States of America are Black. Of course, as with anything, there are the critics who choose to voice their befuddlement on social media, asking the question: Why does this matter? Why does everything always have to be about race? Luckily, Franklin, our current Miss America, has the perfect answer.

“Someone said to me recently, ‘Yes, we know you’re the ninth Black Miss America...but why are we still counting? Do we need to still count?’” Franklin recalls. “And I said: ‘Yes. We need to count. And we’ll keep counting until we can’t count anymore.’”

Now, before we dive any further into the world of sashes and tiaras, allow me to explain the differences between the Miss America and Miss USA organizations: As mentioned, Miss America was founded back in 1921, in an attempt to bring more visitors to Atlantic City, New Jersey. But when the 1951 winner decided she didn’t want to pose in her swimsuit, Catalina Swimsuits—one of the sponsors—broke off and founded the Miss USA pageant, which would go on to become the Miss Universe organization, a platform for Miss USA, Miss Teen USA, and Miss Universe. (And yes, it was also partially owned by Donald Trump from 1996 to 2015, when his controversial comments about illegal immigrants caused NBC to part ways with the competition. After buying them out, Trump then sold the companyto William Morris Endeavor.)

Through controversies and accusations that the entire premise of pageants encourages misogyny, both organizations have made strides to become more progressive and inclusive. The Miss Universe organization, for example, began allowing transgender women to participate in 2012. And in 2018, Miss America changed its description from pageant to competition, and also eliminated swimsuits as part of the process.

We're going against the stereotype that it’s not possible for Black women to uplift each other.

But for all their progress, it’s clear that it’s these three—Franklin, Kryst, and Garris—who are making pageants cool again. Franklin, 25, is a composer and classically-trained opera singer with a Master’s in music composition. She plays the ukulele (!) and uses her title to work with arts advocacy programs to bring music to children. Kryst, on the other hand, is a civil litigation lawyer who often defends prison inmates pro bono; during her time as Miss USA, she’s chosen to become an ambassador for Dress for Success, which helps prepare women for job interviews. And at just 18, Garris recently graduated from not one, but two high schools: Her public school in Milford, Connecticut, and a performing arts school where she studied theater. In the fall, she’ll head to Southern Connecticut State University to study nursing...in between running her foundation We Are People 1st, inspired by her older sister who has cerebral palsy and lives with multiple disabilities.

So, in a nutshell: Each of these women have more on their resumes than most people will achieve in a lifetime. But Kryst admits they still often encounter the stigma that's attached to being a beauty queen. “People are usually surprised when they learn that I’m a lawyer—and it’s irritating, honestly,” Kryst says. “I remember when I was Miss North Carolina USA being at an event when a woman walked up to me and said sarcastically: ‘It must be so hard showing up to events and just being pretty.’ It was jaw-dropping to realize that this woman thought that’s all I must do, and that there wasn’t more to me than that. I do think our society’s views about pageants are changing, but it is happening more slowly than I’d like.”

Somehow, though, everything seems to click perfectly when this trio is together. Take, for example, the photoshoot for this story across various neighborhoods in New York, meant to capture Miss America, Miss USA, and Miss Teen USA sans tiaras, enjoying a day of normalcy despite their beauty queen statuses. First, there is the moment a pair of elderly girlfriends stop Franklin on the street to thank her for making brown-skinned women like them feel beautiful. Next, a fluffy golden teacup poodle wanders up to Kryst for a snuggle that is just too adorable not to capture. And finally, there is the 13-year-old Black girl who watches the threesome wide-eyed before her mother encourages her to ask Garris for a photo. As the four of them snap a half dozen selfies, our photographer captures that moment, and the entire afternoon feels like the stuff of photoshoot dreams.

Even between takes, their sisterhood is evident. The pageant winners often stand off to the side to laugh together at something on one of their phones. Franklin doesn’t hesitate twice to offer the last slice of New York style pizza to her other two photoshoot subjects before going for it herself. After Garris hangs up a Facetime call from her friends who are showing her what’s happening during Senior Day at school—which she’s missing to be here at this shoot—Franklin and Kryst both share some encouraging words about how the sacrifice will all be worth it.

Still, Kryst admits that things weren’t always so sisterly in the competition world. “I remember being told while competing that I was ‘pretty for a Black girl,’ and watching pageants and noticing there was always a token woman of color,” Kryst remembers. “So when I started competing, it was challenging, because if you saw other women of color, you realized ‘They’re only gonna let one of us in.’ So to be honest, it took time. But finally seeing other women of color support each other in groups during pageants showed me it doesn’t have to be just a token person who makes it to finals. That was important for me to see, but it was not prevalent when I first started out.”

Franklin adds that there is indeed more of a sisterhood now in the competition world, particularly amongst Black women. In fact, after Franklin and Kryst met at an interest meeting for Miss South Carolina in 2015, they remained close friends.

“Cheslie has been one of my biggest supporters from day one and has always encouraged me,” Franklin says. “So it’s always felt like we were in this together. And now we have Kaleigh, who’s a teenager, so we get to mentor her—it feels like we’re her older sisters now. I feel proud that we’re here empowering each other as three Black women, and going against the stereotype that it’s not possible for Black women to uplift each other. We’re proof that’s not true.”

For Kryst and Garris, the significance of their wins had another layer beyond just their identities as Black women: Their hair. Each also made history for being the first Black women to win their titles while also wearing their natural hair.

“I didn’t do it to make a statement, though I was aware it might start some conversation,” says Kryst, who stopped straightening her hair after she won Miss North Carolina USA earlier in 2019. “For me, it was a really personal decision. It wasn’t about proving to anyone that my natural hair is beautiful—it was about me believing my natural hair is beautiful. And knowing that by showing it off, I could encourage other women to feel the same way about their hair.”

Even for Garris, who had grown up competing in several “natural pageants” that required no makeup or extensions, opting for anything other than the industry standard of straight hair was a big risk.

“Luckily I was growing up during the natural hair movement, so seeing other women do it pushed me to think ‘Hey, I could do that too,'” Garris says. “And instead of thinking it was something that would set me back, I saw it as something that would help me stand apart. Still, it took some time to get used to. There was never anybody that told me ‘Oh you shouldn’t wear your natural hair,’ but I also knew it was a big step because I wasn’t going to look like the stereotypical pageant girl I had seen growing up. So it took courage.” 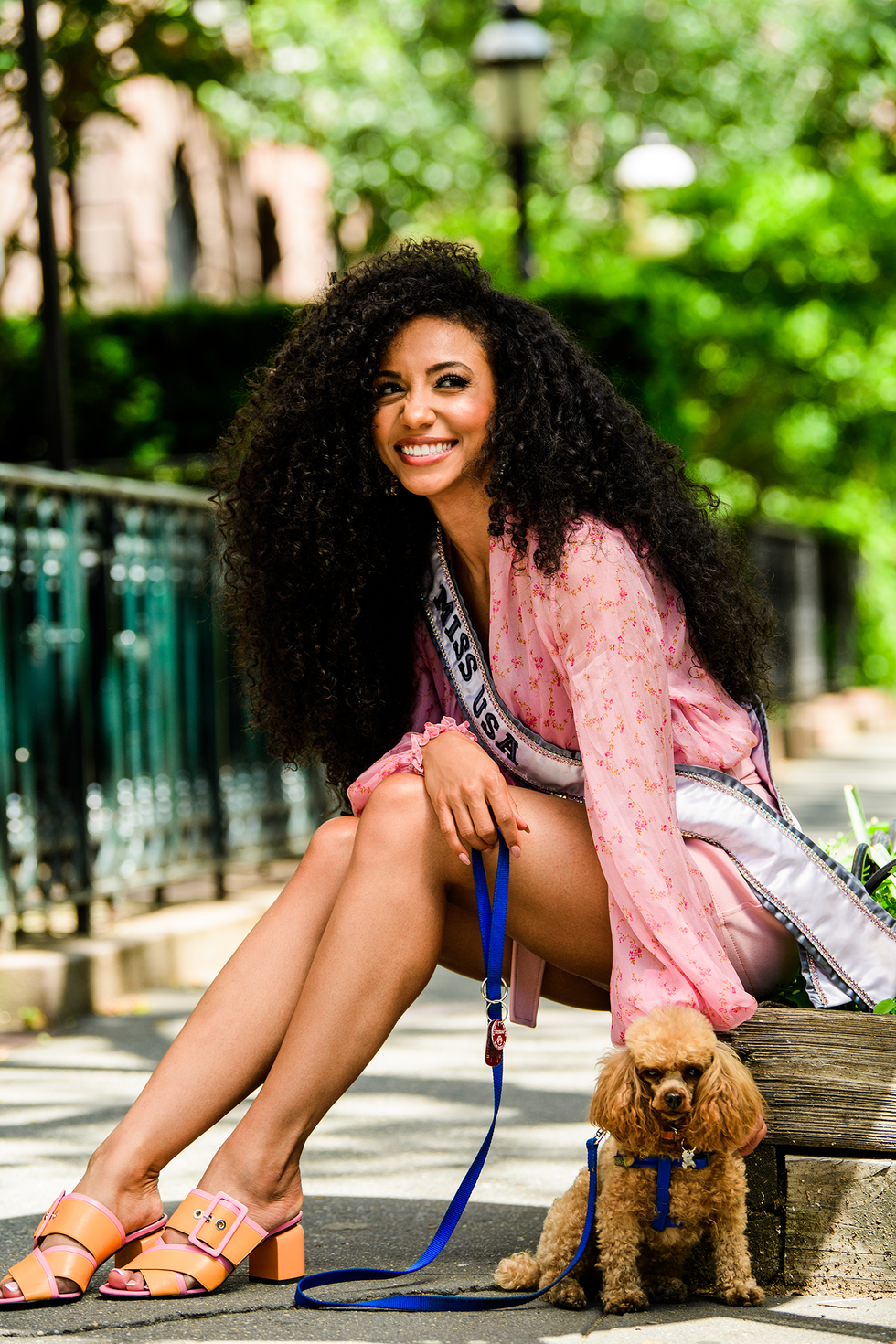 As a Black woman interviewing three Black women—all successful beyond measure in their own rights, even without the sashes and tiaras—I have to ask if they ever wish the focus was more on them individually, less on their collective status as Firsts. While all three admit they'd love if there was a bit more spotlight on their talents and individual missions rather than the color of their skin, they reiterate that they’ll never tire of talking about it. For them, it means celebrating how far we’ve come—while also acknowledging how much further we have left to go.

“I’ve never once felt like, ‘Oh I’m so sad that people are only seeing my color,’ because at the end of the day, I’m a Black woman, and with the history of slavery being so deeply rooted in our country for over 400 years...race is always going to be part of this country’s conversation,” Franklin says.

“I’m proud to be a Black women, just like I’m proud that I’m educated, that I’m smart, that I care about people. I do hope that one day this will be normal...that like Martin Luther King, Jr. hoped for, our skin color really won’t matter. But until then I think it’s important to celebrate the firsts. The same way we celebrated Barack Obama, a man of color, who became the first Black president. Sometimes, we just need to celebrate.”

Miss America, Miss USA, and Miss Teen USA are all carrying much more than sparkling crowns—they’re carrying the hopes, dreams, and expectations of many. But for just a few hours on one day in New York City, they aren’t beauty queens: They’re just three young women who can’t resist a cute pup or a slice of pizza. Yet—with or without their crowns—there is no denying these three women are queens. And because of them, that little girl who stopped to take a selfie with them knows that she can be, too.

Get to know your Miss Congeniality 2018 from Sri Lanka.
Tutorial

3 Bold Eye Shadow Colors You Have to Try this Summer

Summer is a time to try to new things, be daring, exciting and bold.
Tutorial

Bare Makeup for the Summer

These past Miss Universe titleholders show us they aren’t afraid to bare it all.
Tutorial

How to Pack a National Costume

The National Costume competition is one of the most unique and highly anticipated parts of the Mi...
Tutorial

5 Feelings You Get While Voting

Cast your ballot, your vote counts!
ALL NEWS