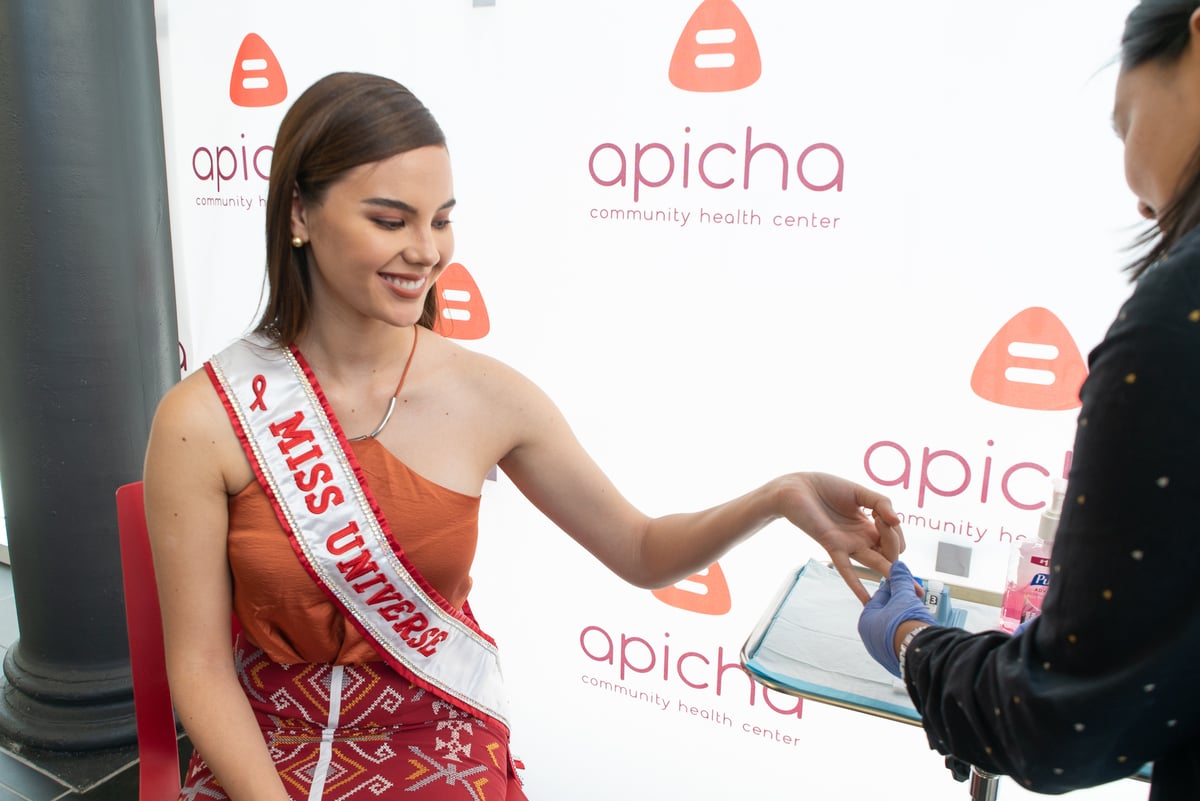 New York, New York – June 26, 2018 – Miss Universe, Catriona Gray, received a public HIV test at New York City’s Apicha Community Health Center (CHC) to encourage others to get tested and know their status. Ending the stigma associated with testing is critical to ending the HIV/AIDS epidemic as an estimated 9.4 million of the 36.9 million people living with HIV worldwide do not know they are infected. In the United States around 1.1. million people have HIV, and one in seven of them do not know they have it.

Gray was tested using an INSTI® HIV-1/HIV-2 Rapid Antibody Test that used a finger prick to collect the sample. As reigning Miss Universe, Gray has been a public advocate and supporter of HIV testing and linkage to care. Prior to undergoing the test, Gray vocalized her support for testing. “[HIV testing] is not a judgement, it’s just an act of looking after yourself. I don’t want people to live their life in fear and be defined by something like this.”

At the event Apicha CHC’s Chief Executive officer, Therese Rodriguez, stressed the importance of the occasion, “We still must encourage individuals to get tested and know their status. We know that stigma and fear remain the biggest barriers that keep people from getting tested for HIV…Through uniting and working together as community, we can help change lives.”

Also present at the event was Stephanie Hubbard, Senior Program Planner for the Bureau of HIV’s Prevention Program at the New York City Health Department. Hubbard spoke on the importance of getting an HIV test as the first step in decreasing new infection rates and a status neutral approach to HIV/AIDS.

“The Health Department is committed to reducing the stark disparities we see in new HIV diagnoses each year by approaching all our work using a racial and social justice lens,” Hubbard said. “Acknowledging that poverty, racism, sexism, gender bias, homophobia, transphobia, and biases associated with HIV status, immigration status, and national origin, are drivers of the HIV epidemic.”

Hubbard also outlined New York State’s plan to end the epidemic by 2020 and noted New York City has reduced new infections rates by 64 percent since HIV case reporting began, from over 5,900 new diagnoses reported in 2001 to 2,157 in 2017.

The public test took place in advance of National HIV Testing Day on Thursday, June 27th when special testing events will be held around the United States. To find a testing site near you, you can go to gettested.cdc.gov and enter your zip code or call 1-800-CDC-Info.