What to Expect From This Years National Costume Competition 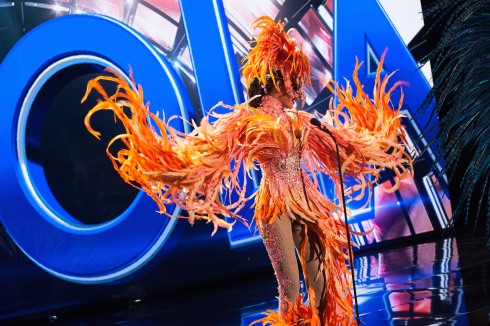 Miss Universe Barbados Shannon Harris: “It is a stylized depiction of Barbados' most visited tourist attraction – Harrison's Cave. My team and our National Costume designer and I worked on concepts and what we felt was a perfect way to celebrate Barbados the best.”

Miss Universe Aruba Charlene Leslie: “The Curly Gem.” Through my national costume I will represent the one and only, powerful, educated and talented local sports winner of twelve World Championships. She is the Wind Surfing Queen also known as the “Curly Gem”; Sara Quita Offringa. The humble passion, determination and diversity that this young lady represents, has inspired my National Costume. This costume also reflects the unique North East trade winds and beautiful beaches that Aruba possesses. In 2016 Aruba hosted its 30th annual “Aruba Hi Winds,” an international surfing and kite boarding competition that has attracted participants from many countries from around the region and the world.

Miss Universe Argentina Estefania Bernal: “My costume is golden with colors representing the earth and nature. It is inspired by the Pacha Mama that is in Mother Earth.” 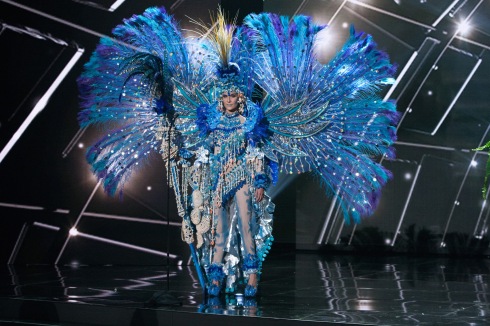 Miss Universe Bahamas Cherell Williamson: “My costume depicts the Bahamas' Coat of Arms which comprises our country's national symbols – the flamingo, the national bird, the Blue Marlin, the national fish, the Yellow Elder, the national flower, and various elements of our sun, sand, sea, and history. The handcrafted Swarovski crystals which adorn to entire costume are specifically designed to represent the reflection of the beauty, creativity, and uniqueness of the Bahamian people and those who encounter the wonders of our tropical island nation.”

Miss Universe Bulgaria Violina Ancheva: “My costume is new interpretation of a famous Bulgarian painting ‘Girl from Kalotintzi' painted by Vladimir Dimitrov – The Master in 1929 that symbols the beauty of Bulgarian women. Now-a-days this picture is part of the student program in history about Bulgarian artists in the early 30s. My costume was designed specially for me by a student – master in The National Art Academy of Bulgaria Iva Partacheva.”

Miss Universe Canada Siera Bearchell: “My National Costume is a matching top and bottom red outfit with a maple leaf, Métis symbol, and Canadian pattern. I will have a snowflake back piece that has all of the Canadian provinces and territories included in the snowflake shape. I will also be wearing a toque, mittens and mukluks! Very Canadian!” 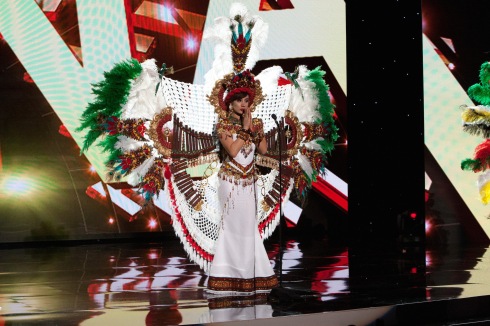 Miss Universe Costa Rica Carolina Rodriguez Duran: “The National Costume has been designed through modeling, with volume and overlapping pieces covered with flowers and leaves handmade with recycled cans. In addition it has interventions with beads in the front and back of the crop Top; The skirt is made with a recycled vaporous fabric with a transparency of subtle green tones. The suit is inspired by tStrelitzia reginae (Ave del Paraiso), it is an abstract transfer of its forms and volumes. Cover of flowers and leaves that represent the country's biodiversity and our people´s hard work. After analyzing the most representative aspects of Costa Rica, the theme of preserving the environmental was recurrent. In addition to accounting for approximately 5% of the world's biodiversity, the country is committed to environmental conservation, betting on protected areas, tourism, renewable energy, among others. So nature is not only part of the landscape but also of our culture and being Costa Rican overall.”

Miss Universe Czech Republic Andrea Bezdekova: “Dress is created by atelier Ronda Hrouda, in cooperation with the special primary school in Pod?brady town. Dress has charity importance and proceeds from their sale will be dedicated to this special school with attend mentally retarded children. We have created a romantic white velvet dress. The dress has a deep neckline and sleeves are sewn from fine silk. Skirt is expanding ash the bottom part and is decorated with handmade flowers. These flowers are made by mentally handicap children from the special school in Podebrady. Interesting thing is that the flowers are composed of small sewing coloured buttons. Production of the type of buttons was preserved only in the Czech Republic as the only place in the world. The crown of beauty consist of hand knotted floral wreath, which refers to Slavic roots.”

Miss Universe Ecuador Connie Jiménez: “The Hummingbird. Ecuador is a country known as the “land of the hummingbirds”, harboring a total of 124 species, that are originally from the American region. Hummingbirds can be found at 4,800 meters above sea level. They are unique birds that can fly backwards. The idea behind this beautiful National Costume, came from the diversity of the hummingbirds' colors, a splendid creation for Ecuador and the World.” 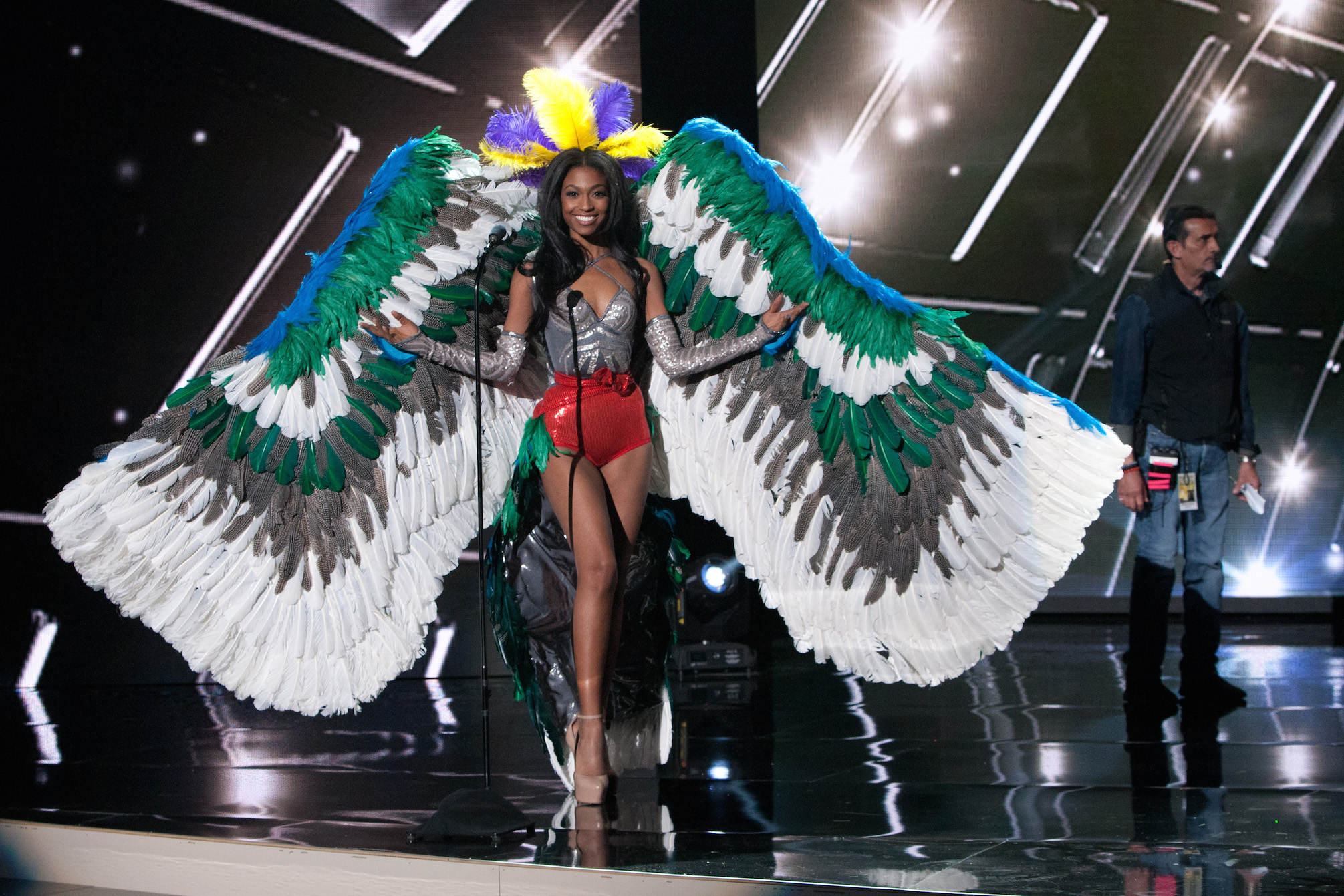 Miss Universe Finland Shirly Karvinen: “My National Costume is themed after Christmas. I love christmas and the message that christmas is. It is about being with your loved ones and appreciating family.”

Miss Universe France Iris Mittenaere: “It is a red feather costume with a big hat full of feather also. It is actually one of the traditional costume of dancers of the Moulin Rouge in Paris, which a famous cabaret is Paris known worldly.”

Miss Universe Great Britain Jaime-Lee Faulkner: “My National Costume is inspired by Britannia, the Greek and Roman term for the geographical region of Great Britain and Ireland and the name of the female personification of the island. I came up with the concept as I think a goddess of the ocean is quite fitting and symbolic to me and my country.”

Miss Universe Ukraine Alena Spodynyuk: “My National Costume called ‘Blooming Ukraine.' In it, the authors SVITLO studio designers have tried to make a mix of national styles and details of different regions of Ukraine. My costume – this is how I see my country: fun, cheerful, bright and blooming and peaceful. The sewing skirt was used as the material of the carpet which is more than 70 years of black linen with hand-embroidered flowers. The image consists of a blouse, corset, fluffy skirt and a hat made of flowers. Complements dress exclusive decoration of a variety of beads.”

Miss Universe Guam Muneka Joy Cruz Taisipic: “My National Costume was about a 9 foot tall and 5 foot wide turtle that was spray painted many beautiful colors and sprinkled with glitter to make it pop. The inspiration behind this idea was the fact that when I was growing up, my mom played for a volleyball team called ‘Haggan' which means turtle, and I grew up in that team and was inspired by it.” 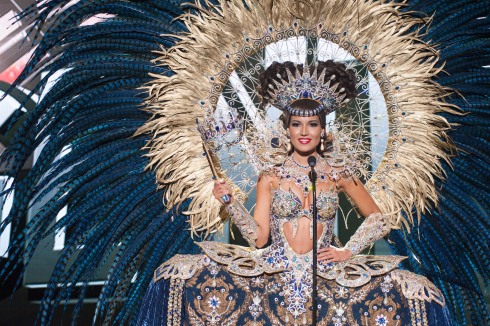 Miss Universe Iceland Hildur Maria: “Iceland is known as the land of fire and ice and that was the main inspiration of my National Costume. It is a fantasy representation of both elements of fire & ice. In my home country volcanoes coexist with glaciers and we wanted to bring that to life in my National Costume. In addition, there is an element of the Icelandic flag colors of blue (for the ocean), white (for snow and glaciers) and red (for volcanoes).”

Miss Universe India Roshmitha Harimurthy: “My National Costume is an inspiration of a traditional theatre form that combines dance music and costume, Yakshagana. It is colorful, loud and dynamic. We came up with this concept as this theatre style is present in the coastal districts of my state, Karnataka.”

Miss Universe Israel Yam Kaspers Anshel: My National Costume is based on eve from the Bible.

Miss Universe Kenya Mary Were: “We are going by the ‘Save the Elephant' theme which had been going on in our country to raise awareness on poaching and removing of elephant tasks. My national dress will be themed around this.” 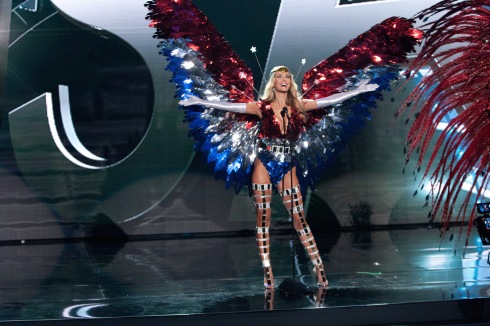 Miss Universe Malaysia Kiranmeet Kaur Baljeet Singh: “The Petronas Twin Towers in Malaysia is the inspiration behind my National Costume as it is my country's crown jewel. The towers remain the tallest twin towers in the world and are depicted through its outline that resembles the letter “M” for Malaysia. The jagged structure resembles one of Malaysia's traditional handicrafts – basket weaving, thus highlighting her strong cultural values. The jumpsuit is silver in colour, embellished and accompanied with multi-coloured Swarovski diamonds. Both sides of the sleeves will be elaborated to look like our Twin Towers with a V shape neckline and a diamond choker to complete the ensemble.”

Miss Universe Malta Martha Fenech: “My National Costume has blue to represent the velvet blue seas of the Mediterranean and yellows/oranges to represent the sun that is so synonymous with my country. It is presented with a lot of feathers which also represent our national bird “Il-Merill” – and therefore, like a bird flies in the immense skies, I will be flying over and spreading my wings and uniting with so many other different nations during the Miss Universe pageant.”

Miss Universe Mauritius Kushboo Ramnawaj: “My National Costume is made of biodegradable and earth friendly materials. It is hand painted and it involved the children from an orphanage who were encouraged to use their creative skills by giving their personal touch in painting one side of the dress.” 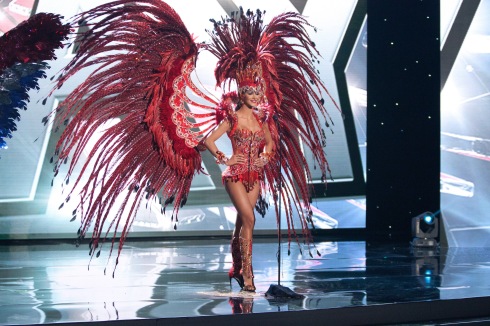 Miss Universe Myanmar Htet Htet Htun: “My National Costume is also crafted by Mr. Gam Htoi Lazing. For this year, the National Costume was selected by the association of Miss Universe Myanmar Organization. This costume is inspired by a Myanmar Traditional Puppet Dance, called Yoat Thay. This traditional dance is one of Myanmar's treasures as it has been passed down generations after generations and that's why we chose this costume as our National Costume. On the costume, there is a mini stage background which we will use to try to show the world a puppet dance in a actual human being. We want to let the world notice Myanmar's rich culture and tradition through this costume and dance.”

Miss Universe Norway Christina Waage: “My National Costume dress is inspired by the Norwegian Wildflower (Bergfrue), the Mountain Queen. Norway have used the same National Costume (Bunaden) as long as I can remember. This year we wanted to do something different.”

Miss Universe Sierra Leone Hawa Kamara: “My National Costume is inspired by the African cotton cloth that is uses for everyday wear in Sierra Leone. The grass skirt represents the costume used for dancing and it is decorated by headgear, beads and seashells.”

Miss Universe Sri Lanka Jayathi De Silva: “My National Costume is called ‘Osariya,' it represents traditional female attire in Sri Lanka. It is a two-piece outfit, a blouse that covers the midriff accompanied by a saree. In comparison to the standard saree draping style, the key distinguishing feature here is that the saree is not pleated at the waist, it is pleated at the shoulders and has a more constricted pallu (the fall over the shoulder).”

Miss Universe Denmark Christina Mikkelsen: “The national costume is a snow queen, embodying the famous Danish author Hans Christian Andersen, the fairytale dress will come to life by Majbritt Kokholm. This idea is a little out of the box, but we want to show the beauty of Denmark.”

For the first time in the pageant’s history, an out lesbian woman will take the stage.
BTS

Catriona Gray to be among Miss South Africa 2019 judges